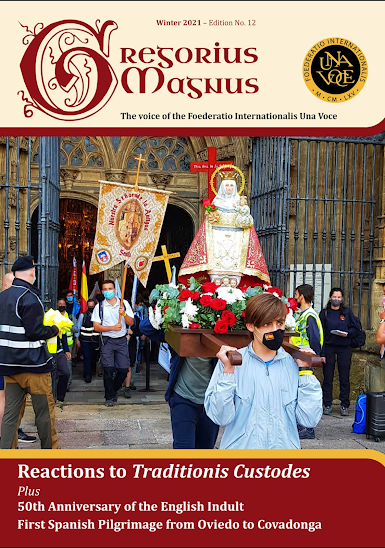 If you are not aware, this web page is operated by Una Voce. The Una Voce International Headquarters publishes a free magazine for all those who are members, or for supporters of Una Voce's mission to restore tradition to the Church. Click below to read the latest free edition that has just been published. 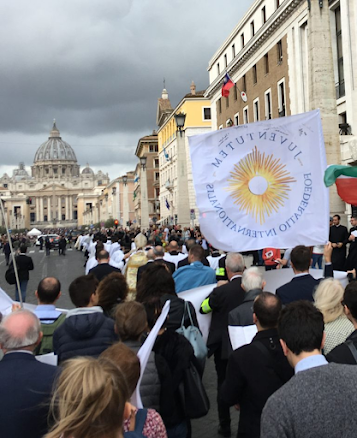 Juventutem Atlanta is a group of young Catholics ages 18-35, single, married, religious, who are serious about the Catholic Faith. They will be meeting on Saturday November 6th. Non Catholics are invited to attend. They will attend the 9:00 am mass at St Francis de Sales and enjoy a pot luck breakfast in the parish hall following mass. After breakfast they will car pool to Kennesaw Mountain for a hike. For info or to RSVP please email: juventutematlanta@gmail.com

For info on the parish of Saint Francis de Sales, click : www.fsspatl.com

BISHOP PARKES VISITS ALL HIS PARISHES 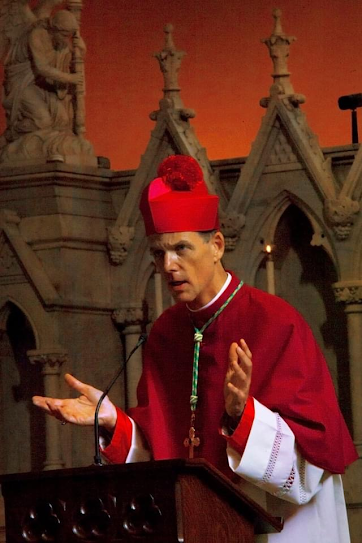 From the Latin Mass Community in Savannah:

Bishop Parkes is currently travelling through the diocese, holding Listening Sessions to better learn about the needs of his flock.

This is a great time to thank the Bishop for the Latin Masses that are established and to show support for it in areas where it is not available.Thank God for such a bishop who actually wants to hear from his faithful.

OCTOBER 24TH AUGUSTA BE THERE 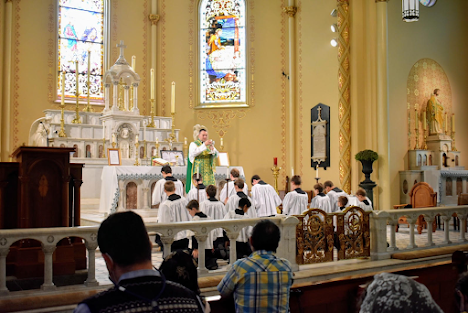 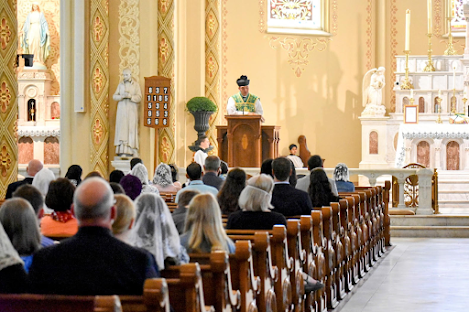 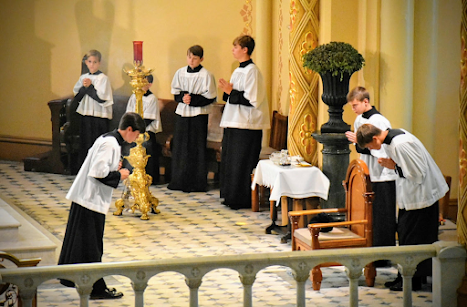 The Latin High Mass in Augusta will now have a new set time and date. It will be every 4th Sunday at the new mass time of 12:30 pm. Please note the time change. Each month the mass will be followed by a pot luck social in the parish hall. This pot luck is so a traditional community can form for the Augusta area and allow like minded Catholics to meet each other. There is usually entertainment as well. Even if you don't bring anything, please come and meet everyone. 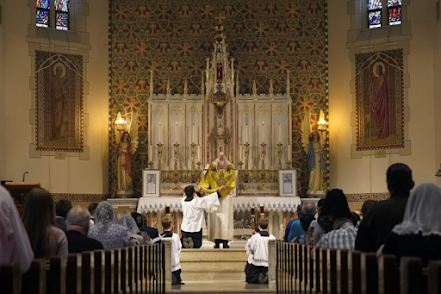 ATLANTA—In a Sept. 8 memo to his priests, Archbishop Gregory J. Hartmayer, OFM Conv., outlined how the Archdiocese of Atlanta will implement Pope Francis’ Motu Proprio “Traditionis Custodes.” While St. Francis de Sales Church in Mableton will be able to continue to provide all sacraments using the pre-Vatican II 1962 Missal and St. Monica Church in Duluth will offer one Mass in the Extraordinary form each week, no other priest can publicly celebrate a Mass or offer a sacrament in this way. The memo goes into effect during the first week of October.

The Pope’s July Motu Proprio called on bishops around the world to limit the use of the pre-Vatican II Mass in their dioceses and put a stop to founding any new personal parishes. The pope cited a need for unity in making his decision. The Congregation for the Doctrine of the Faith surveyed bishops around the world about the use of the so-called Tridentine Masses. “The responses reveal a situation that preoccupies and saddens me, and persuades me of the need to intervene,” wrote the pope.

In 2007, Pope Benedict granted permission for the Tridentine Masses to be celebrated. He felt the old and new liturgies could exist in the same parish without causing division. The survey seemed to indicate otherwise. Pope Francis felt too many Catholics were going to the Extraordinary Form Masses because they rejected the reforms of Vatican II.

“A final reason for my decision is this: ever more plain in the words and attitudes of many is the close connection between the choice of celebrations according to the liturgical books prior to Vatican Council II and the rejection of the Church and her institutions in the name of what is called the “true Church,” wrote the pope. “One is dealing here with comportment that contradicts communion and nurtures the divisive tendency—I belong to Paul; I belong instead to Apollo; I belong to Cephas; I belong to Christ’—against which the Apostle Paul so vigorously reacted,” he added.

St. Francis de Sales is not like other parishes in the archdiocese. The parish is served by the Priestly Fraternity of St. Peter (FSSP), an order that offers the sacraments of the church using the pre-Vatican II Missal from 1962. “St. Francis de Sales is a personal parish. This is different from a territorial parish, which is meant to minister to the faithful in a defined geographical area of the diocese. One’s home parish is determined by where he lives. A personal parish on the other hand is meant to serve a particular group of faithful in the diocese and is not restricted to a certain area of the diocese. Personal parishes are often based on nationality and celebrate the sacraments in a particular language to meet the needs of an ethnic group,” explained Father Andrew Rapoport, FSSP, parochial vicar for St. Francis de Sales. “Our parish was established for those who are devoted to the Traditional Mass in Latin. Consequently, any Catholic living in the Archdiocese is able to join our parish,” he wrote in an email to The Georgia Bulletin.

Father Rapoport added that the parish welcomes visitors, but he recommends people watch a video or read a little about the pre-Vatican II Mass before they come so they know what to expect.

Liturgical reforms instituted after the Second Vatican Council dramatically changed how Catholics worshipped. Prior to the council, most sacraments, including Mass, were in Latin. The priest faced “ad orientem,” or to the east, with his back to the people. Prayers and responses were sung in Latin, usually by a choir since many lay people did not know the chant or polyphony used.

Vatican II called for people to actively participate in Mass. One way to accomplish this was to offer readings and prayers in the vernacular language of the local community. The priest turned to face the people, the altar pulled away from the wall and additional versions of the Eucharistic Prayer were added. The new missal included a third Scripture reading and included previously omitted selections from the Gospels. For many Catholics, the changes were radical and not welcomed. Others saw the reforms as a much-needed modernization of the church.

Father Charles Byrd, pastor at Mary Our Queen Church, converted to Catholicism after—as he describes it—stumbling into a church where Latin and chant were used every Sunday. He went on to study liturgy and tells his parish he loves to sing. He says there are many good things about the reformed liturgy, called the Novus Ordo. “The old Mass had two readings while the Novus Ordo has three. In the old rite, the readings were on a one-year cycle and mostly used Matthew and John. In the new form, Mark and Luke were added so it does open up Scripture to us,” he said.

One of the most dramatic changes, in his view, was in music. While readings and prayers were translated, the traditional hymns, set to polyphony and chant were left behind in favor of modern music. New efforts are underway to translate the hymns into English and reintroduce them to the Novus Ordo. Father Byrd believes adding back these hymns would help make the Novus Ordo more solemn and beautiful. “People are looking for reverence (in Mass),” he said.

In his memo, Archbishop Hartmayer urges the priests of the diocese to take extra care to make sure their liturgies are good ones, saying “Brothers, we must do everything in our power to ensure that our eucharistic liturgies are celebrated with utmost reverence and respect. Our eucharistic celebrations must be the best that we can provide and encourage congregational participation.” He encouraged them to invest in music and in their worship spaces and to take extra time and effort with their preaching. “I implore you to proclaim the Gospel message from your heart and take time to pray and reflect on what the Gospel is saying to you as you prepare to feed your people with the Word of God,” wrote the archbishop.

ANOTHER HIGH MASS COMING UP IN SOUTH GEORGIA

Calling all Catholics in south Georgia and north Florida please plan to attend the restoration of the traditional Latin Mass at Saint Antony of Padua in Ray City Georgia. This is extremely significant. Please come, bring a friend, and show support for tradition in the Savannah Diocese. If you want to help or volunteer please contact the parish.

TRADITIONAL MASS YESTERDAY FOR THE EXALTATION OF THE CROSS 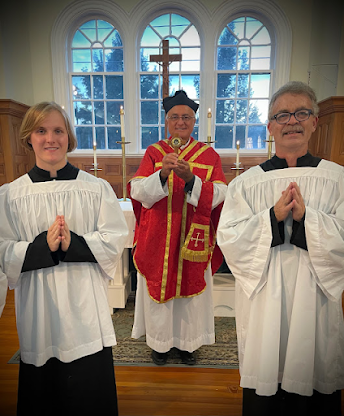 Father McDonald with Relic of  the True Cross

The pastor of Saint Anne's church in Richmond Hill, Father Allan McDonald celebrated the traditional Latin Mass for yesterdays Feast of the Exaltation of the Holy Cross. The mass was said in the Martha & Mary Chapel. Following mass, Father imposed the relic of the True Cross on the Faithful.