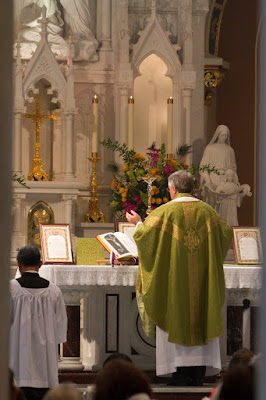 The below is a report from the pastor of St Josephs about last Sundays Mass. Please make an effort to thank Father McDonald for his support of the Latin Mass at (478) 745-1631

On the last day of Pope Francis historic visit to the USA and his historic Mass in Philadelphia prior to his historic departure from the historic Philadelphia Historic International Airport in front of a historic crowd of admirers, Saint Joseph Church down the road from Philadelphia in Macon, Georgia celebrated its first ever since the historic Second Vatican Council Extraordinary Form of the Mass in the High Form at a normally scheduled Sunday Mass! HISTORIC!

No one offered any negative feedback. The Mass took about the same amount of time as our Ordinary Form Mass at this time, 12:10 PM.

I prepared for this day since September 14, 2007 when we had our first EF Mass.

In the last three years, we have celebrated the Liturgy of the Eucharist ad orientem and in the last six months we have been distributing Holy Communion to communicants kneeling at the full length of the altar railing.

Last November 2 which fell on a Sunday, we celebrated the All Souls' Mass with our combined choirs singing Faure's Requiem. It was an Ordinary Form Mass, but mostly in Latin.

Several people said the Mass yesterday was beautiful and that this form of the Mass is more reverent.

I would agree. I contend, though, the reverence isn't in the Latin Language, per se, although some might say that; it is in the following:

It is also formal, no folksiness and no ad libs or banalities
Posted by Una Voce of Atlanta at 7:43 AM No comments: 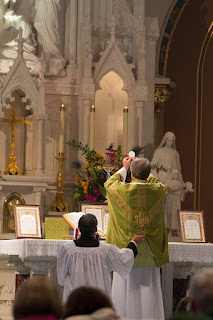 THE BELOW IS FROM FATHER MC DONALD ABOUT THIS UPCOMING SUNDAY'S LATIN MASS AT HIS PARISH
Even though we have had it the first Sunday of the Month at 2:00 PM for about eight years now, we have had this Mass at other times for special occasions and Holy Days of Obligation.  So a much wider swath of our parishioners have experienced it. Most like it for its overall sense of reverence and will come for their "fix" for it on occasions all the while preferring our well celebrated and reverent Ordinary Form Masses.

I am warning and informing our parishioners this Sunday in the announcements that next Sunday's 12:10 PM Mass will be in the Extraordinary Form.

Then next Sunday, prior to the Mass, I will explain from the pulpit but very briefly the theology and spirituality of this Mass, the reason why it is all Latin and the reason for the quiet Roman Canon and that at this Mass Holy Communion is distributed on the tongue and not in the hand although I won't be scrupulous about it if someone receives in the hand. They will have their choice even after my explanation.

So there is great anticipation and anxiety brewing. More to come!
Posted by Una Voce of Atlanta at 9:20 AM No comments:

St Josephs in Macon will hold its first Sunday Latin High Mass under its new mass schedule on September 27th at 12:10 pm. The Latin Mass will now be celebrated on the last Sunday of each month at 12:10 pm. It will replace the regularly scheduled 12:10 novus ordo mass.