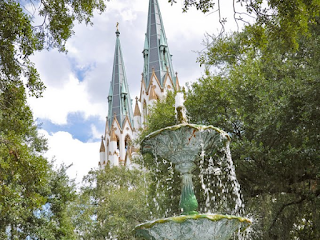 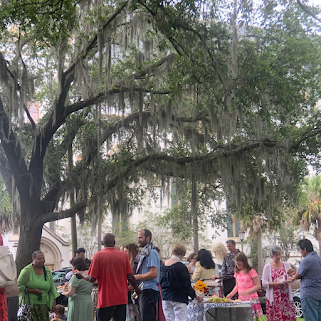 Traditional Catholics Meet After Mass in the square outside

of the Savannah Cathedral

Traditional Catholics in the Savannah Diocese have organized and formed an official chapter of Una Voce for their Diocese. This has been a long time in development. The National and International Organization has approved their membership application and they are now the ONLY OFFICIAL organization in the Diocese to promote the Traditional Latin Mass. The new Una Voce chapter is titled Una Voce South Georgia and is now officially in charge of the development of the Latin mass in the Savannah Diocese. To join the movement or to volunteer to help, or for any other info please contact Una Voce South Georgia

Because of the reorganization, the current chapter of Una Voce Georgia is now going to be known as Una Voce Atlanta.  The old Una Voce Georgia organization (now Una Voce Atlanta) will no longer cover the entire state but will now concentrate soley on the Atlanta Archdiocese. All members of Una Voce Georgia who reside in or near the Savannah Diocese need to contact Una Voce South Georgia and join their contact list. Everyone else will remain in the Una Voce Atlanta organization, and you will not need to do anything to change your membership. You will automatically be listed as a member of Una Voce Atlanta. It doesn't seem like that long ago in the 1980's when we started, and all traditional Catholics in Georgia knew each other on a first name basis. The old timers will remember the phone calls, newsletters mailed out and the hope that before we died there would be a Latin mass somewhere in Georgia. This is proof positive that we are now a substantial force in this state and our tremendous growth proves it.

Una Voce Atlanta will continue using the web address of:

Una Voce Atlanta now has its own exclusive email: